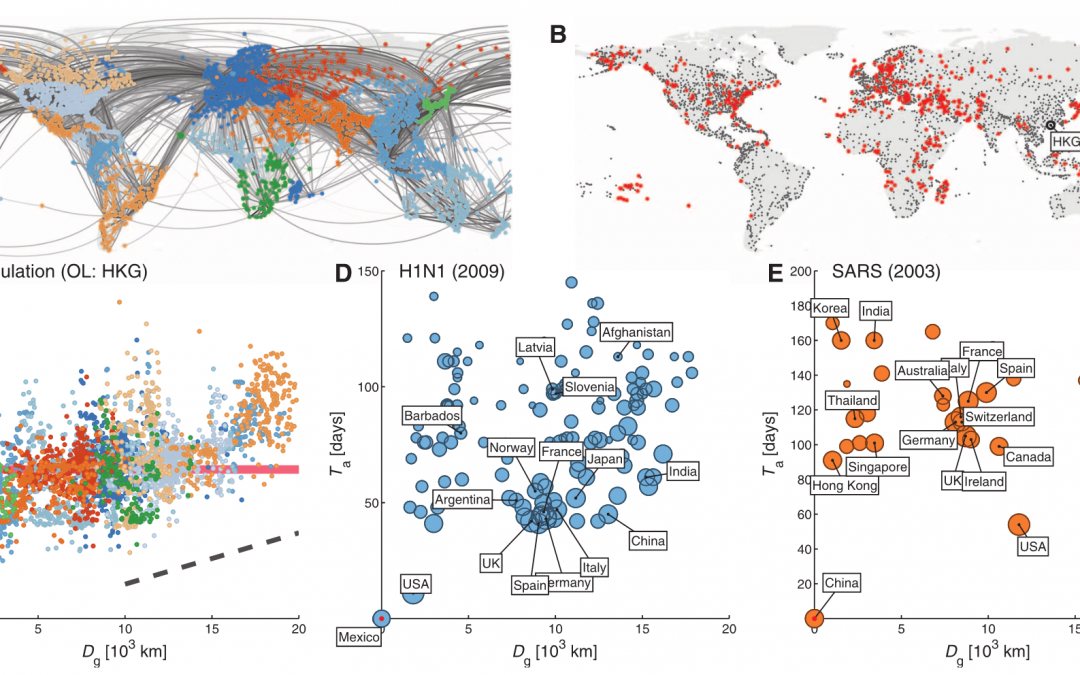 The global spread of epidemics, rumors, opinions, and innovations are complex, network-driven dynamic processes. The combined multiscale nature and intrinsic heterogeneity of the underlying networks make it difficult to develop an intuitive understanding of these processes, to distinguish relevant from peripheral factors, to predict their time course, and to locate their origin. However, we show that complex spatiotemporal patterns can be reduced to surprisingly simple, homogeneous wave propagation patterns, if conventional geographic distance is replaced by a probabilistically motivated effective distance. In the context of global, air-traffic–mediated epidemics, we show that effective distance reliably predicts disease arrival times. Even if epidemiological parameters are unknown, the method can still deliver relative arrival times. The approach can also identify the spatial origin of spreading processes and successfully be applied to data of the worldwide 2009 H1N1 influenza pandemic and 2003 SARS epidemic.

Modern systems are always coupled. Previous studies indicate that coupled systems are more fragile than single systems. In a single system, when a fraction of 1-p nodes are removed, the percolation process is often of the second order. In a coupled system, due to the lack of resilience, the phase transition is always of the first order when removing a fraction of nodes. Most of previous studies on coupled systems focus on one-to-one dependency relation. This kind of relationship is called a no-feedback condition. Existing studies suppose that coupled systems are much more fragile without a no-feedback condition. That is to say, if a node depends on more than one node, the coupled system will breakdown even when a small fraction of nodes are removed from the coupled system. By observing the real world system, real nodes are often dependent on a dependency cluster, which consists of more than one other node. For example, in an industry chain, an electronic equipment factory may need several raw material factories to supply production components. Despite part of the raw material factories being bankrupt, the electronic equipment factory can carry out production normally because the remaining raw material factories still supply the necessary production components. But theoretical analysis shows that the robustness of such a coupled system is worse than that of one-to-one dependency system. Actually, the coupled system in real world does not usually disintegrate into pieces after some nodes have become invalid. To explain this phenomenon, we model a coupled system as interdependent networks and study, both analytically and numerically, the percolation in interdependent networks with conditional dependency clusters. A node in our model survives until the number of failed nodes in its dependency cluster is greater than a threshold. Our exact solutions of giant component size are in good agreement with the simulation results. Though our model does not have second order phase transition, we still find ways to improve the robustness of interdependent networks. One way is to increase the dependency cluster failure threshold. A higher threshold means that more nodes in the dependency cluster can be removed without breaking down the node depending on the cluster. Other way is to increase the size of dependency clusters, the more the nodes in the dependency cluster, the more the failure combinations are, which increases the survival probability of the node depending on cluster. Our model offers a useful strategy to enhance the robustness of coupled system and makes a good contribution to the study of interdependent networks with dependency clusters.